Financial AstrologyStocks choppy ahead of Friday's US jobs report

Stocks choppy ahead of Friday’s US jobs report

(3 August 2022)
Stocks have been choppy to start the month of August as strong
corporate earnings have mostly offset recession fears amid weakening
macro data.   As expected, stocks fell in the early week as Mars
conjoined Uranus and Rahu (North Lunar Node) — and thereby activated
the underlying Saturn-Neptune-Uranus-Chiron alignment — although the
decline was fairly modest despite geopolitical jitters from Speaker
Pelosi’s trip to Taiwan.  Wednesday’s rebound was also not too
surprising as the Moon aligned with Venus and Mars.  While US stocks
are still very much in rebound mode following the June low, it remains
to be seen if this year’s down trend is truly over.

One explanation for the relative strength in the market in recent weeks
can be understood in terms of the navamsa, or 9th harmonic chart.  This
chart is commonly used in Vedic astrology to provide an additional
perspective on the relative planetary strengths above and beyond what a
normal transit analysis would provide.

It should be noted that Western astrology also uses the 9th harmonic,
although it does not grant it the analytical primacy that Vedic
astrology does.  The basic premise of the navamsa chart is that planets
have a special resonance when their natal rasi positions are
multiplied by 9.  In this way, the navamsa chart highlights the
importance of the 40-degree novile aspect which is a key divisor of the
360 degree circle.

The recent Jupiter retrograde station on July 28 is a good example of
the mechanism behind the 9th harmonic navamsa chart.  Jupiter retrograde
stations tend to be bullish in any event since the velocity of Jupiter
is slowing both before and after the station.  One of the fundamental
axioms of financial astrology is that slow moving planets have a
greater capacity for good or ill depending on their nature.  As Jupiter
slows around its stations, markets are more likely to rise. 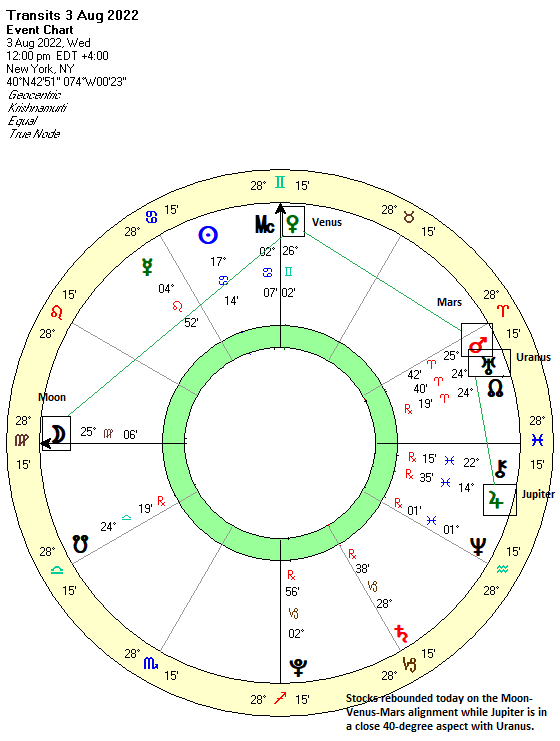 But with this particular station, we can see that Jupiter (14 Pisces)
formed a near-exact 40-degree novile aspect with Uranus (24 Aries).
Since Jupiter-Uranus aspects are invariably bullish, this influence
increased both the probability and the strength of the positive market
outcomes towards the end of July.  Expressed in terms of the navamsa/9th
harmonic chart, however, Jupiter and Uranus were conjunct.

As we can see in today’s navamsa chart, this 9th harmonic
Jupiter-Uranus conjunction is still within just one degree at 11-12
Scorpio.  Today’s bullish outcome was made more likely because this
Jupiter-Uranus alignment was opposite Mercury, another bullish
influence.  And with Venus in a favourable 120-degree alignment with
Pluto and moving past the potentially bearish influence of the Mars
aspect, there were a clear majority of bullish influences in this chart. 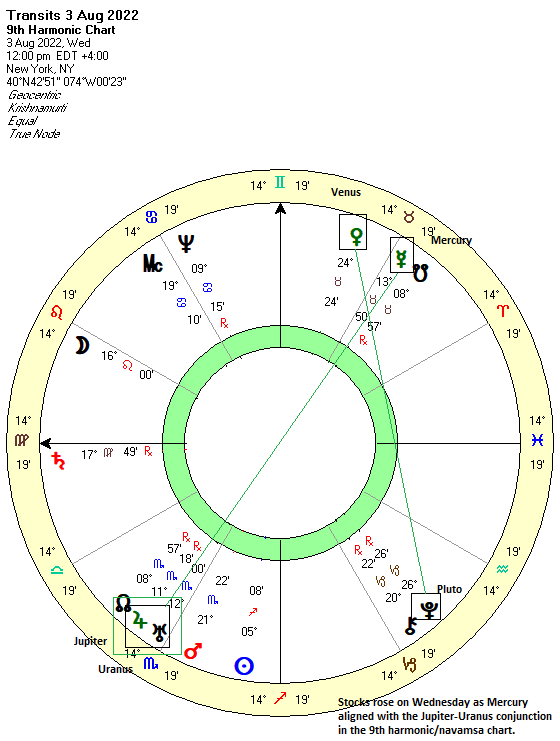 Looking ahead to Friday’s US jobs report, we can see the 9th
harmonic/navamsa chart looks more afflicted.  The Jupiter-Uranus
conjunction will still be close at hand although now two degrees away,
but the real problem is that Saturn will square both Mercury and Venus
within a few degrees each.  This increases the downside risk for the end
of the week and suggests a negative reaction to the jobs report. 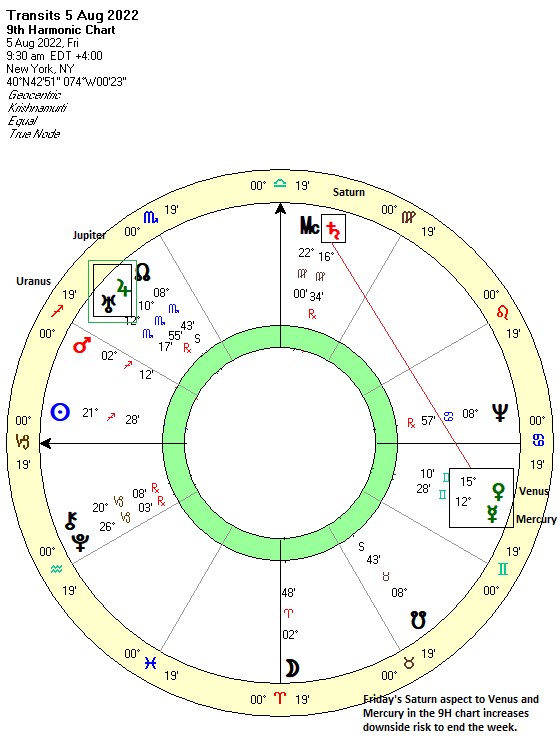 In this way, the navamsa/9th harmonic can provide useful additional
information to the main rasi transit chart which can help tip the
interpretive balance one way or the other.

For more details, check out my weekly subscriber newsletter which
is published every Saturday afternoon (EST).   In addition to
reviewing the key planetary and technical influences on US and Indian
stocks for the short and medium term, I also provide an
astrological analysis of potential upcoming moves in currencies,
gold and oil.