(24 August 2022)
Stocks look more vulnerable here in the waning dog days of summer as
inflation remains a primary concern, especially in Europe.   Much of
the summer rally had been predicated on the assumption that inflation
may have peaked in the US and that this could pave the way to a more
dovish Fed that would be less hawkish in its commitment to interest
rate hikes.  While US inflation has eased off somewhat, European
inflation continues to rise as energy prices have reached a crisis
level given the ongoing disruption from the Ukraine-Russia war.

But all eyes will be on Fed Chair Jerome Powell on Friday as he delivers
his annual speech from Jackson Hole, Wyoming.  Powell is expected to
reveal his current plan to tackle inflation and whether or not the Fed
will to slow the pace of rate hikes starting with its next FOMC meeting
on September 21.   Being creatures of liquidity, investors will be
hoping for any dovish signals from Powell, perhaps as a response to some
recent data that suggest the economy may be slowing.  If, however,
Powell reiterates his commitment to reducing inflation to the Fed’s long
term target of 2%, the market could sell-off on the prospect of
significantly higher interest rates down the road.

A look at the horoscope of the Federal Reserve reflects the potential
precariousness of the current economic situation.  Typically, the
economy tends to do well this chart is strengthened by Jupiter and other
benefics as it reflects a Fed that is successfully managing an
economic expansion.  When the chart is afflicted by Saturn or other
malefics, however, that can mean a more stressful time for the Fed and
greater economic uncertainty. 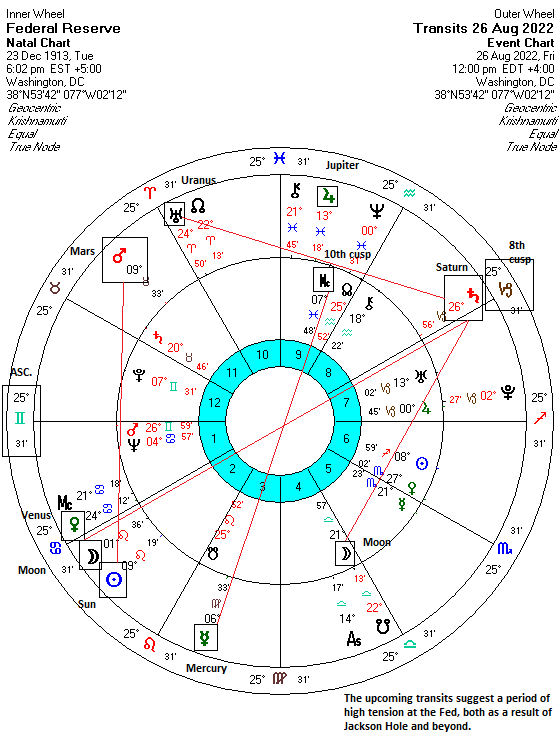 The main problem here is that Saturn (27 Capricorn) conjoins the 8th
house cusp (25 Capricorn) representing obstacles, setbacks and
scandals.  Saturn is usually a difficult energy whenever it closely
aligns with a planet or cusp and that is very much the case here since
the 8th house is considered the most malefic house in the chart.  Saturn
is currently retrograde and is due to station direct on October 23 at
24 degrees of sidereal Capricorn.  This will be just one degree past an
exact conjunction with the 8th house cusp and a 150-degree alignment
with the Ascendant.  Regardless of the immediate aftermath of the
Jackson Hole speech, it does suggest the Fed is entering a period of
higher stress for the next two months or so while the Saturn alignment
is in range.

The outlook isn’t entirely negative, however, as retrograde Jupiter will
be approaching a conjunction with the 10th house cusp (MC) in October
and November.  This is a very positive influence and suggests the Fed
will eventually assume a more positive leadership role where it could be
praised for its actions.  While the Jupiter influence is very strong
here, it does not override the likely damage from Saturn.  No doubt, the
Fed will encounter both positive and negative situations as a result
of these dueling influences.  I do suspect that Saturn’s negative
influence is more likely to manifest first since Saturn will resume
normal forward motion first, while Jupiter will resume its forward
motion on November 23.

In terms of the immediate reaction to Friday’s
Jackson Hole speech, the Mars-Sun square looks quite tense and suggests
an atmosphere of caution is more likely to prevail.  Along with the
Moon-Mars conjunction, this alignment increases the likelihood of a
negative market reaction to Powell’s speech.   Also, we should note the
presence of benefics Mercury and Venus in the chart on Friday.
Although usually positive, Mercury is placed at the very bottom of the
chart opposite the 10th house and hints at “unfortunate communication”
while the Venus opposition to Saturn signifies restraint and loss.  It
therefore seems less likely that Powell will suddenly turn dovish and
pause the rate hikes.  We shall see how it all unfolds.For more details, check out my weekly subscriber newsletter which
is published every Saturday afternoon (EST).   In addition to
reviewing the key planetary and technical influences on US and
Indian stocks for the short and medium term, I also provide an
astrological analysis of potential upcoming moves in
currencies, gold and oil.