(31 August 2022)
The crisis in Europe only seems to go from bad to worse.  Russia’s
invasion of Ukraine initiated a cascade of events that has resulted in
an unprecedented energy crisis in Europe.  The February invasion
prompted Western countries to impose strict sanctions on Russia,
including the banning of Russian oil and gas upon which Europe was
almost wholly dependent.  The sanctions have led to severe shortages
and sky-high prices as governments have enforced austere restrictions
on its populations.  This week Russia upped the stakes again as it
halted all flows of gas through its Nord Stream 1 pipeline, ostensibly
for pipeline maintenance.  However, it is unclear if Russia will resume
the gas flows on Saturday, September 3 as scheduled.

The shortages have led to crippling five- to ten-fold price increases
for both business and consumers and threaten the proper functioning of
the European economy.  And with winter not far off, some governments are
worried that there won’t be enough energy to heat homes and keep
plants running.  Whatever the military and geopolitical implications of
Russia’s invasion of Ukraine, this energy crisis has the potential to
completely devastate Europe’s economy.  Will Europe be able to avoid a
cold, bleak winter?

The horoscope of the European Union (Nov 1, 1993) offers some insight on
this question.   We can see the multiple afflictions to the EU chart
at the time of the invasion in February.  Not surprisingly, malefics
Saturn and the Lunar Nodes, Rahu and Ketu are very prominent in the
chart at that time.  From its placement in the 7th house, Saturn 24
(Capricorn) was approaching its Saturn return and was within one degree
of opposing the Ascendant (23 Cancer), which underlined the oppressive
and unwanted nature of the invasion.  Since the 7th house symbolizes
partners (both business and marital), Saturn’s transit to the 7th house
cusp represented a major setback with Russia, Europe’s energy exporter
and partner. 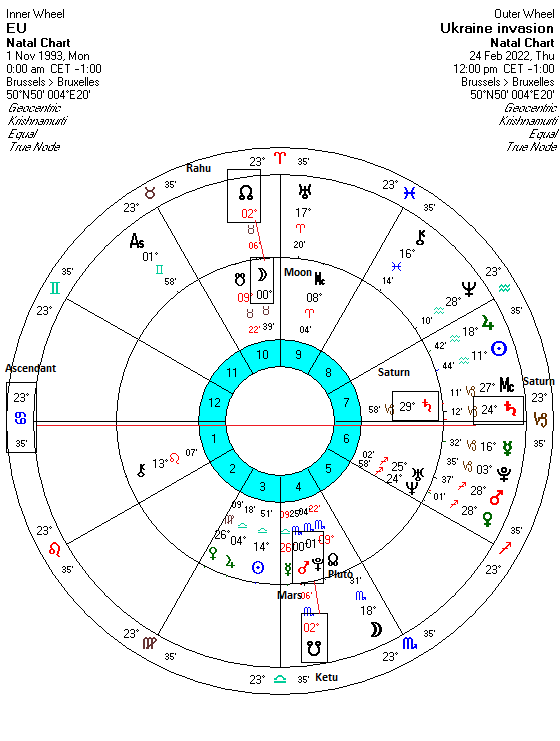 The nodal transit to the complex alignment of Mars-Pluto-Moon reflected
the sudden and explosive nature of the invasion.  Typically, transits
of Rahu and Ketu to Mars are synonymous with violent or unsettled
situations, and even more so when they simultaneously align with the
Moon (population, emotions) and Pluto (power, coercion).   The fact that
these transits occur with important chart points is a very big reason
why Europe suddenly fell into its worst crisis since World War Two.

It is also worth noting that the EU horoscope was running the very
difficult Rahu-Saturn dasha at the time.  Dasha lord Rahu is conjunct
Mars and Pluto thus reflecting the greater likelihood of intense,
coercive situations while Saturn is in a very close 90-degree alignment
with Mars, Pluto and the Moon.  Saturn’s minor dasha period therefore
was more likely to feature hardship and war due to its nasty alignment
with those three tense planets. 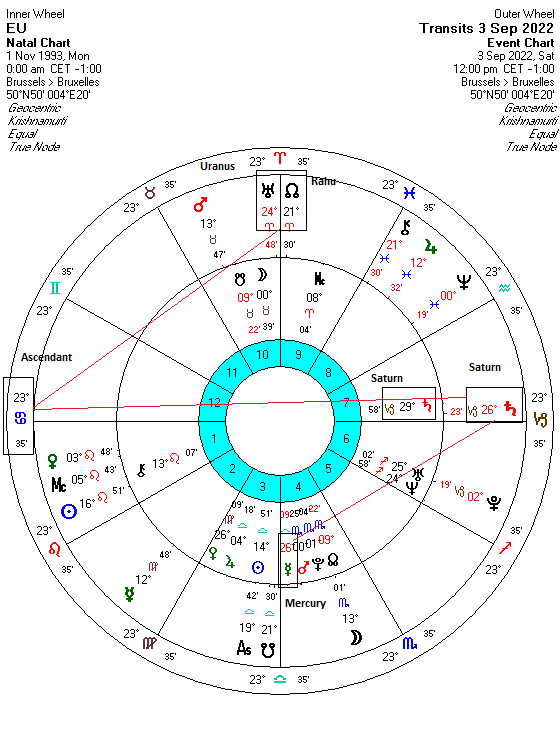 The transits for this week’s pipeline shutdown also show significant
affliction.  After stationing retrograde in June at 1 Aquarius, Saturn
is now on its way back to exactly opposing the Ascendant, just two
degrees from its position in February at 24 Capricorn.   Saturn (26
Capricorn) exactly squares Mercury (26 Libra) in the 4th house and
reflects the current economic disruption in Europe.  The transit path of
Saturn here was especially destructive.  After opposing the Ascendant
at the time of invasion, it stationed exactly square the
Mars-Pluto-Moon alignment in June in the first degree of Aquarius.  It
doesn’t get much worse than that.   While it is certainly possible that
Russia may not fully resume gas supplies to Europe after this
scheduled halt expires on Sep 3, the short term aspects (esp. involving
Mars) don’t look bad enough for that kind of nightmare scenario.
Perhaps supplies will be reinstated but with the ongoing threat of
being cut again.

The larger problem is that Saturn is due to station direct at 24
Capricorn in late October.   The Uranus and Rahu conjunction at the top
of the chart also form hard aspects to the Ascendant and are no doubt
also part of this scenario of difficulty.  With Saturn and Uranus due to
form a close square in October, it seems quite likely that the
situation in Europe will remain precarious for several more weeks, and
it could well get worse on this difficult square aspect.  We could
finally see some improvement by November after Saturn resumes its normal
forward motion, however, as it moves away from its alignment with the
EU Ascendant.  .

Stocks are drifting lower this week as the market realizes the Fed is
unlikely to reverse its rate hikes this year.  While the outlook doesn’t
look very encouraging in the near term, we should not be surprised if
this week’s Mercury-Jupiter alignment coincides with a rally attempt at
some point.  While it seems unlikely to alter the down trend, it could
bring some upside in the coming days.

For more details, check out my weekly subscriber newsletter which
is published every Saturday afternoon (EST).   In addition to
reviewing the key planetary and technical influences on US
and Indian stocks for the short and medium term, I also
provide an astrological analysis of potential upcoming moves
in currencies, gold and oil.