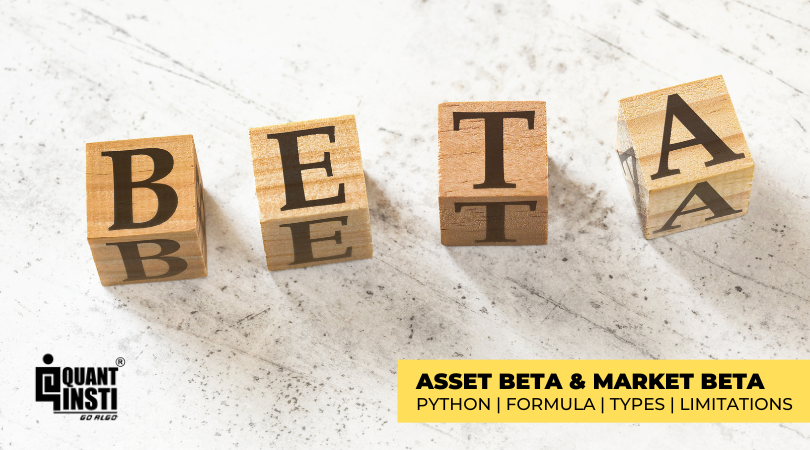 By Chainika Thakar and Jay Maniar

‘Beta’ in the stock market and how we can use beta effectively to hedge against market risk. We will also see how to calculate the beta of any stock in python. So let us begin, by understanding a few basic questions that should come to our mind before we start coding in python.

Let us find it all out with this blog that covers:

The volatility that a benchmark portfolio (S&P 500 index) or a market portfolio exhibits is known as systematic risk.

Beta is the historical measure of risk of any individual stock or portfolio against the risk of the market portfolio. In other words, it measures the volatility of any security with respect to the overall market volatility.

Let us consider the following example to understand beta intuitively.

In other words, the returns on Google stock will outperform the market by 50% and the alpha on Google would be 5%.

Now, if the market declines by 5%, then Google will decline by 7.5% or 50% more than the market. Google’s change in market value is multiplied by its beta to estimate its movement in future. Hence, Google is a high beta stock.

Similarly, if the beta of any stock is say 0.75, then it will be less volatile than the market. If the intraday gains of the market are 10%, a low-beta stock will gain only 7.5%. Low-beta stocks are very useful to mitigate market risk.

This is because, if the market declines by 5%, then the stock will decline by only 3.75%. This is less than the benchmark decline as opposed to the decline by Google where the market fell by 5%.

To begin, let us import the data in python and plot the daily returns of Google and the S&P 500 index.

What is asset beta?

Here is the formula for asset beta:

For example, a company with a beta of 1.5 has returns that are 150% as volatile as the market it’s being compared to.

Let us now see the types of beta values which are:

Beta Value Equal to One

Beta Value Between Zero to One

A beta value between zero to one means that the stock is less volatile than the market. The risk factor would be lower in a portfolio with low beta stock as compared to a portfolio without such stocks.

Beta Value Greater Than One

A beta that is greater than one indicates that the stock is more volatile than the market. This implies that adding the stock to the portfolio will increase the portfolio’s risk, but at the same time, the tendency for higher expected returns also increases.

The stock with a negative beta could be thought of as the opposite of benchmark trends. These stocks tend to do better when the entire market goes down and do worse when the market is up. Put options, inverse ETFs, and gold tend to have negative betas.

How to calculate beta?

One of the most common ways to calculate beta is using the Capital Asset Pricing Model or CAPM.

Have a look at the CAPM model:

If we have all the values except the asset’s beta, we can calculate the beta using:

We can even find the beta by performing ‘regression analysis’.

When one tries to capture a mathematical relationship between ‘x’ and ‘y’ variables, by fitting a line, polynomial, or a curve through scatter plots, such that one can make a reasonably good prediction of  ‘y’ for the given ‘x’, then the mathematical process of deriving such an equation between x and y is called the regression analysis.

This equation can also be arrived at by using a machine learning-based regression model.

Linear regression assumes a linear relationship between the dependent and independent variables. The following regression equation describes that relation:

We refer to the intercept ‘b0’ and slope coefficient ‘b1’ as the regression coefficients, Xi as the independent variable and ei as the random error.

To understand the coefficients more intuitively, if we consider the returns for Google vs. S&P 500 index, then the slope coefficient in a regression line is called the stock’s beta, as it measures the relative amount of systematic or non-diversifiable risk in Google’s returns.

Thus, the regression line minimises the SSE. This is the reason why simple linear regression is also called Ordinary Least Squares or OLS, and the estimated (predicted) values by the regression equation i.e. the predicted y-values are called least squares estimates.

The slope coefficient ‘b1’ of the regression line is calculated as the covariance of x and y divided by the variance of x (covxy /σ2x ), and the intercept coefficient is the line’s intersection with the y axis at x = 0.

Consider the following code to calculate Google’s beta against S&P 500.

We have calculated the beta of Google as 1.00. You may try this with other stocks.

We can even hedge Google’s beta with respect to the S&P 500 beta. This is known as beta hedging.

Even though the beta is a widely used measure of systematic risk it is exposed to certain limitations.

One of the most prominent limitations is that it does not incorporate new information.

Consider a utility company: let’s call it Company X. Company X has been considered a stock with a low beta. When it entered the merchant energy business and assumed more debt, X’s historical beta no longer captured the substantial risks the company took on.

At the same time, many stocks that are relatively new to the market have insufficient price history to establish a reliable beta.

Another drawback is that even though past data can be a good predictor of future performance, it does not guarantee the same performance.

We learned all about the basics of beta and the calculation of beta in this blog. Beta is an efficient and reliable tool for measuring the risk of your investment against market risk. Calculating beta helps a trader get a fair idea of the risk that a particular stock or portfolio is exposed to.

Some stocks increase the potential risk of a portfolio while others reduce the risk. Whereas, some stocks are neutral. Also, there are some stocks which move in the opposite direction from the market having a negative beta.

Note: The original post has been revamped on 23rd December 2022 for accuracy, and recentness.

Disclaimer: All investments and trading in the stock market involve risk. Any decision to place trades in the financial markets, including trading in stock or options or other financial instruments is a personal decision that should only be made after thorough research, including a personal risk and financial assessment and the engagement of professional assistance to the extent you believe necessary. The trading strategies or related information mentioned in this article is for informational purposes only.