(21 September 2022)
The Federal Reserve surprised no one today by hiking interest rates
another 75 basis points in its ongoing efforts to curb inflation.  The
Fed’s overnight lending rate now stands at 3.25% with a strong
likelihood of rising to 4% at its next meeting in early November.  With
inflation remaining stubbornly high, the Fed has little choice but to
maintain its aggressive stance as markets are now expecting the
tightening cycle to stay in place into 2023.

In his remarks today, Fed Chair Jerome Powell confirmed that the Fed
will continue to raise rates as long as necessary to bring inflation
back down to its 2% target.   All this hawkish talk was bad news for
risk assets as stocks reversed course this afternoon and ended the day
sharply lower.  Higher rates are typically anathema to investors as
borrowing costs rise and choke off economic growth.  Powell also
cautioned that house prices are likely to fall further while
unemployment is almost certain to rise as the speculative froth comes
out of the economy.

This week’s decline appears to reflect the current afflictions the horoscope of the Federal Reserve.  Last month, I noted that the Fed’s chart
looked significantly afflicted for September and October.  Given the
close correlation between the Fed’s actions and the stock market,
afflictions to the Fed chart tend to signal periods of weakness in
stocks.   While the Fed generally wants stocks to rise in order to
generate the “wealth effect” and boost the economy, their first priority
is keeping inflation in check, even if that means sacrificing the
stock market. 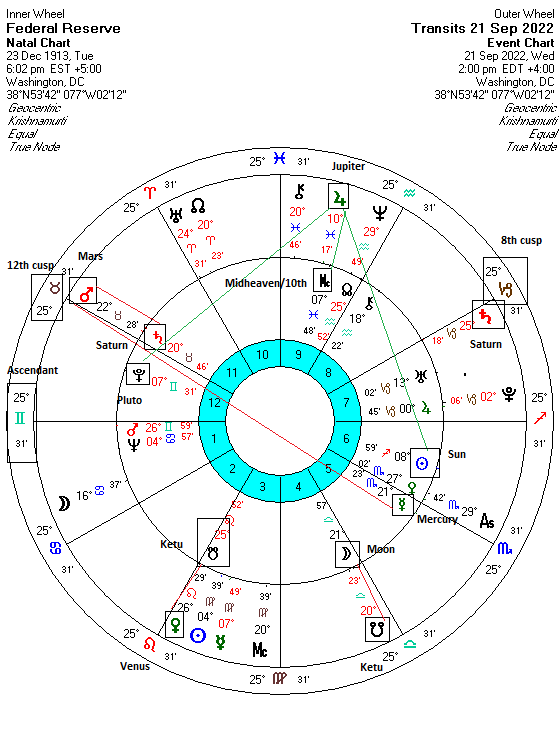 The afflictions of the conjunction of Saturn with the equal 8th house
cusp and the conjunction of Ketu with the Moon appear to be in full
force here.   The 8th house is traditionally considered the most malefic
house so the Saturn conjunction is one of the worst influences
imaginable.  The Saturn-8th house conjunction is likely made worse since
Saturn is slowing down ahead of its direct station in late October.
In addition, since Saturn is now forming a very close square alignment
with Uranus, both planets are resonating with the Fed’s natal Ascendant
at 25 Gemini.  This planetary alignment can almost be considered a
“perfect storm” that is hitting the Fed.    Moreover, the Ketu-Moon
conjunction intensifies these effects and may make the Fed’s actions
less popular to the point of being incomprehensible to the public.  The
Moon symbolizes the public at large.

Interestingly, today’s rate hike and subsequent stock sell-off comes
just as Mars was conjunct natal Saturn and opposite Mercury and just a
few degrees away from the 12th house cusp representing loss.   The
involvement of malefic Mars here only serves to amplify the ongoing
effects of Saturn and Uranus.   Both the Fed and financial markets may
therefore remain under pressure in the coming days as Mars approaches
the 12th cusp at 25 degrees of sidereal Taurus.

Even though Ketu is starting to move away from its difficult conjunction
with the Moon, the outlook is challenging in the short term since the
Saturn-Uranus square will remain essentially stuck in that difficult
place in the Fed horoscope until October.

For more details, check out my weekly subscriber newsletter which
is published every Saturday afternoon (EST).   In addition
to reviewing the key planetary and technical influences on
US and Indian stocks for the short and medium term, I also
provide an astrological analysis of potential upcoming
moves in currencies, gold and oil.