I just wanted to make two quick comments about data in the United States. The first is about a new rent series from researchers at the Cleveland Fed, the second is about labour data.

Brian Adams, Lara Loewenstein, Hugh Montag, and Randal J. Verbrugge just published the working paper “Disentangling Rent Index Differences: Data, Methods, and Scope.” URL: https://www.clevelandfed.org/publications/working-paper/wp-2238-disentangling-rent-index-differences. I did not have time to look over the paper, but the graphs are consistent with the story I have seen elsewhere: the rental data used in the CPI lags behind the latest changes, and the latest changes point to a lower growth rate in rent hikes.

The idea is that they use the same microdata from the BLS rent survey to create new indices based on the latest transactions, which bypasses the smoothing that takes into account that most leases are not renewed in a given month. Rather than mangle the description, I will let the reader purse the article. 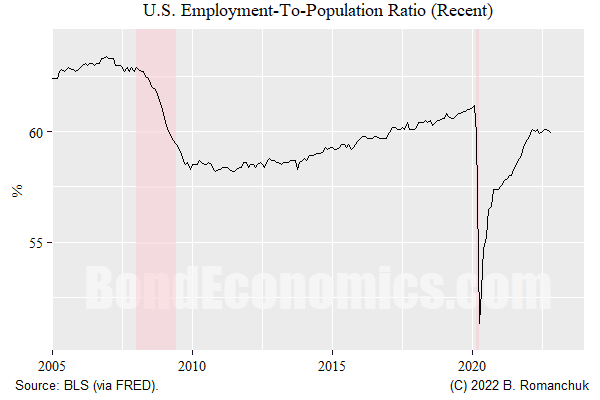 One of the macro controversies that I have no commented on is the divergence between the Establishment Survey and the Household Survey for employment in the United States. To briefly recap: the Establishment Survey is a large survey of employers, whereas the Household Survey is a random survey of households — which a much smaller sample size. (As an example of some commentary on the divergence, see this Employ America report by Preston Mui — https://www.employamerica.org/blog/labor-market-recap-november-2022/.)

The employment-to-population ratio — which is what the survey attempts to directly measure — is shown above. The usual way of looking at employment is the number of jobs, so the above ratio needs to be multiplied by the estimated population to give a number of jobs.

Both measures have good and bad points, which I am going to list in a random order below.

I have not spent any time digging into the details of competing theories of the current status of the U.S. labour market — many of which rely on sources of data that came into prominence after I left finance. That said, my simple take is that I am comfortable with the Household Survey, and my reading is that the economy has settled into a situation where job growth is just in line with population growth. We saw this heading into the Financial Crisis recession, but we have also hit similar soggy patches during expansions. Although some of the more pessimistic people out there are saying that the United States is already in recession, that seems somewhat too aggressive. I would be cautious, but that is hardly a deep insight given the hefty inversion of the Treasury curve.