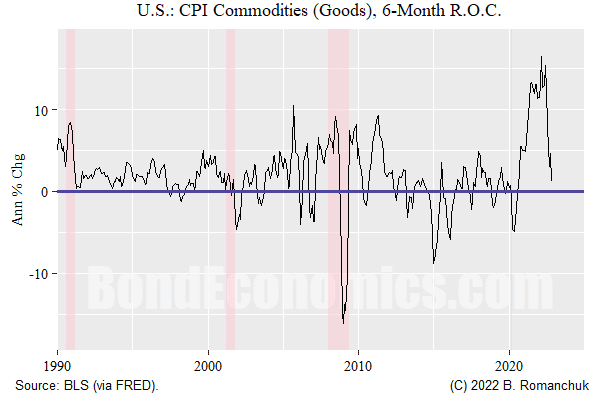 My feeling is that although it is too early to declare victory over high inflation rates, I think we are closing in on closer to “normal” dynamics — by the standards of the post-1990 era. I believe that there are still areas of stronger pricing power, but some of the excesses have been unwound, so that we end up with more mediocre inflation prints. At least we would if the housing component of CPI — constructed to be a very slow-moving series — settles down. The market rent series that I have seen (but I do not have access to) suggest that it will settle down, but that will be a mid-2023 story.

The chart above shows the 6-month annualised rate-of-change of the “commodities” (goods) component of the U.S. CPI. It excludes housing, and is currently near typical levels seen in past cycles. Nothing that looks like a persistent inflation problem, but we cannot completely rule out more supply chain disruptions.

My guess is that we will back to more typical dynamics, where inflation follows aggregate demand with a lag, and business cycle sentiment indicators will be the ones to watch.

This mild inflation print adds to my confidence that it makes sense to wrap up my inflation manuscript. I will not be able to definitively say that inflation will revert to its post-1990 behaviour of bouncing around its target level, but we do not see inflation marching straight up at the end of the chart, which obviously would raise questions from readers.

Criminal charges have been laid in the “FTX Scandal,” hopefully ending a remarkably stupid news cycle. Since I respect the convention of the presumption of innocence, I will not assume that anyone involved is guilty of what they have been charged of. That said, the charges make clear that some very questionable transactions were undertaken by somebody.

I have seen a lot of second-guessing of how the authorities dealt with the situation. I have no expertise in the legal tactics, but I believe they followed the right strategy. Which was to keep crypto at the margins of the financial system, and let the frauds burn themselves out.

This strategy was costly for the small accounts who followed dreams of easy money to end up getting their crypto investments wiped out. However, that was largely inevitable. Nobody had the political capital or will to properly regulate the industry, as even central bankers ended up legitimising the industry by their embrace of central bank digital currency theorycrafting. Meanwhile, regulations would have been easily evaded — and that evasion would have been cheered on.

I see no evidence that anyone has really learned anything from recent events, as we instead see attempts of crypto supports to blame the FTX collapse on the government. Instead, the main risk to the crypto industry is cascading liquidity events as investors attempt to withdraw money. That is a fairly typical reaction to a popping bubble. The core of the crypto system can survive, but the leveraged appendages that drove up crypto asset prices are at risk.

In any event, the lack of contagion to the rest of the financial system confirms that crypto has no macroeconomic significance.