(12 July 2022)
It was an historic day on currency markets today as the Euro fell to
parity with the US dollar for the first time since 2002.   After
briefly trading at 0.998 to the dollar today, the Euro has fallen more
than 20% since its pandemic high in January 2021.  The European economy
has been struggling with the double whammy of post-pandemic inflation
and severe energy shortages that have resulted from the Russia
sanctions following the war in Ukraine.

The reference to 2002 is no coincidence, of course, since that was also a
time of financial disruption and recession following the the bursting
of the tech bubble.  US stock markets have lost about 20%  of their
value this year following the pandemic bubble as the Fed attempts to
bring inflation under control by raising short term interest rates.
However, the ECB’s efforts to fight inflation have been hamstrung by the
crippling effects of the energy shortage as higher rates are a
non-starter in an economy quickly sliding towards recession.  As a
result, the currency is taking a beating as the ECB lags further and
further behind the Fed as capital flees in search of higher yields, most
notably the US.

The Euro woes are clearly seen in its horoscope.  Signed into existence
on December 31, 1998, the Euro is getting hit hard by this ongoing
Saturn-Neptune alignment.  Saturn (0 Aquarius) is the major culprit
here, but its 30-degree alignment with Neptune (1 Pisces) only serves to
magnify its effects.  And there is further magnification of the Saturn
influence since it just stationed retrograde in early June within a
one-degree alignment with the Euro Ascendant at 0 degrees of sidereal
Taurus.  It is hard to imagine a more difficult protracted influence in a
chart.  Due to their slow velocities, Saturn and Neptune have been
sitting very close to 0 degrees of their respective signs since April.
This not only accounts for the decline in the Euro but also most risk
assets such as stocks and an increasing number of commodities.

But with Saturn re-entering Capricorn on Thursday, there could be some
temporary relief coming to the Euro.  This week may also be pivotal
since Venus and the Sun align with the Ascendant and could act as
additional triggers for the bearish Saturn-Neptune energy.  Wednesday’s
Venus-Saturn-Neptune alignment could see a significant move and
Friday’s Sun-Saturn alignment also looks potent. But as Saturn moves
further into Capricorn, it should reduce its influence on the Ascendant
in the Euro horoscope.

As it happens, all eyes will be on tomorrow’s US CPI report.  If the CPI
comes above last month’s 8.6%, then we could see the dollar rally
further at the expense of the Euro.  That is certainly possible, since
Venus makes its exact alignment with the Euro Ascendant tomorrow.
However, I am uncertain about how the market will react since Venus is
often a bullish influence when it aspects major chart points such as the
Ascendant, the Moon or the Sun.  Certainly, there is some downside
risk if only because Venus may act more as a conduit for the negative
Saturn influence.  Friday’s Sun-Saturn-Neptune alignment looks somewhat
more negative, however, both for the Euro and for stocks. 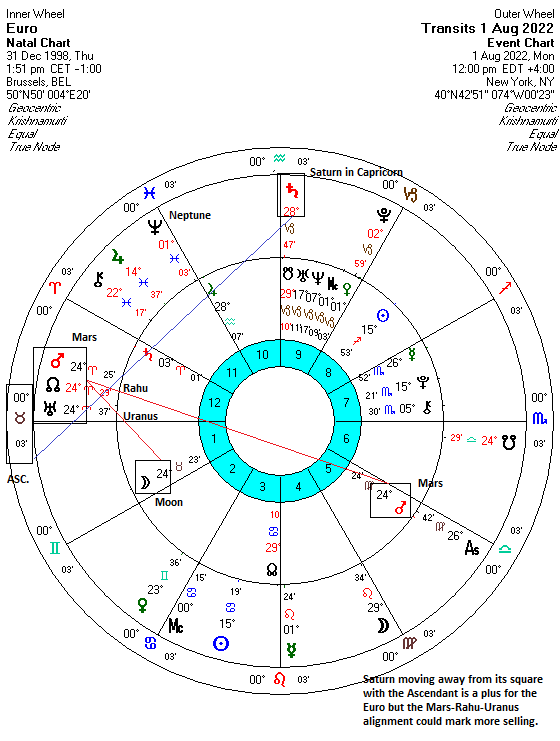 Even if the Euro rebounds from here in the coming days, it is hard to be
too optimistic going forward.  The nasty triple conjunction on August 1
of Mars, Uranus and Rahu aligns with the Moon (24 Taurus) and Mars (24
Virgo) in the Euro and is very likely to see more selling.  And if
that isn’t enough, Saturn will station direct at 24 Capricorn in
October thus setting up another exact alignment with the natal
Moon-Mars.  The bottom line here is that the Euro seems likely to fall
further in the weeks and months ahead.

For more details, check out my weekly subscriber newsletter which
is published every Saturday afternoon (EST).   In addition to
reviewing the key planetary and technical influences on US and Indian
stocks for the short and medium term, I also provide an astrological
analysis of potential upcoming moves in currencies, gold and oil.