(9 November 2022)
The outcome of yesterday’s US midterm elections remains unknown today
as many races are still too close to call.  With a near-even split of
seats in both the House and the Senate, it may be days or even weeks
before we know which party will win control.  US stock markets sold off
today on the unexpected uncertainty, after many polls had suggested a
Republican “red wave” which failed to materialize.

This unexpected result was perhaps not so very unexpected from an
astrological perspective.  In a previous post, I had noted that the
midterm election coincided with a lunar eclipse which significantly
increased the likelihood of uncertain outcomes.  The disruptive
potential of the eclipse was further increased since it occurred at 22
degrees of sidereal Aries and thus exactly conjoined Uranus, the planet
of unpredictable and surprising events.  The negative market impact
likely derived not from the eclipse itself, however, but from the fact
that eclipse highlighted the ongoing Saturn-Uranus square.  As we know,
planetary alignments involving Saturn are usually bearish for market
sentiment.

So what happens now? In market terms, it is possible we could see
further weakness this week as Mercury and the Sun square Saturn, either
because of the continued election uncertainty or perhaps from tomorrow’s
CPI report in the US.  Politically, there is some chance that Biden and
the Democrats could salvage the situation over the weekend.  Biden’s
chart is still quite afflicted by the ongoing Saturn-Uranus square and
Saturn’s aspect to his natal Mars (19 Libra) and Mercury (28 Libra).
And yet there could be some improvement in his fortunes on Sunday and
Monday as Venus and Jupiter align with his Sun-Venus conjunction at 4-5
Scorpio, as well as aspecting his natal Jupiter at 2 Cancer.   On Sunday
evening, the Moon will join this alignment and create a “Grand Trine”
where each planet is separated by 120 degrees. This is usually a signal
for favourable developments.  While it is impossible to know if this
will be election related, it nonetheless opens the door to some good
news.  One possible scenario would be that the outcome of a key Senate
races is finalized on Sunday or early next week that allows Democrats to
retain control of that chamber. 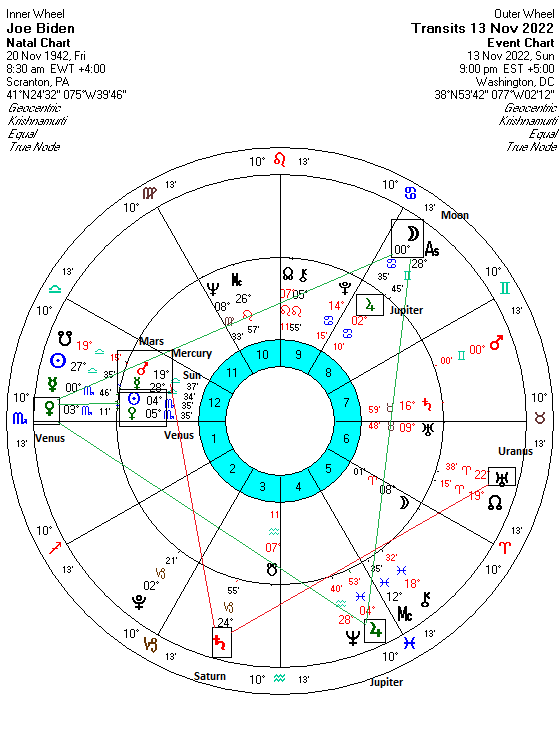 The other favourable time window for Biden and the Democrats is
around Nov 19-20 when the Sun conjoins Biden’s Sun-Venus conjunction.
As an added plus, both Mercury and Venus will conjoin Biden’s Ascendant,
although we should note there is still some uncertainty about the
accuracy of Biden’s birth time.  Nonetheless, this means that even if
Senate control isn’t clear by early next week, the Democrats could get
some more positive election-related news in this second favourable time
window.

The other thing working in Biden’s favour here is that Jupiter is due
to end its retrograde cycle and station direct at 4 degrees of Pisces
on Nov 23.  This will form an exact 120 degree aspect to both his
Sun-Venus conjunction and his his natal Jupiter and should provide a
temporary boost for him at various points during the month of November.
This positive Jupiter influence will likely dissipate after Nov 23 as
it begins to separate from the natal Sun and Venus. 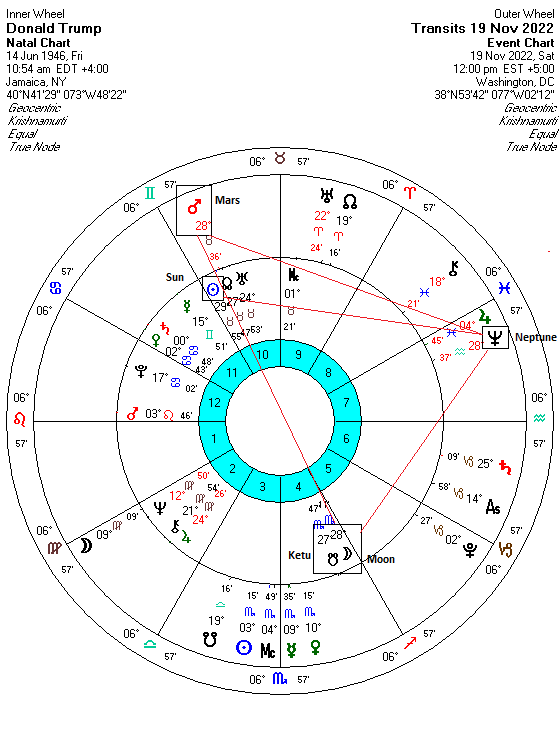 The other takeaway from the election is the relatively weaker
position of former president Donald Trump.  The failure of the “red
wave” of GOP seats was a partial rejection by voters of his more radical
platform that questioned US election integrity.  After the defeat of
several of his endorsed candidates, his potential candidacy for the 2024
election is now in doubt.  Betting markets now put Florida governor Ron
DeSantis as the favourite to be the GOP nominee over Trump for the
first time.

We can see some astrological indications for Trump’s disappointing
election outcome.  Not only was retrograde Mars conjunct his Sun and
opposite his Moon, but Mars is forming a very difficult square alignment
with Neptune.  The ongoing Neptune square with his Sun-Moon natal
opposition is the major reason why Trump has been on the defensive this
year, as he attempts to deflect responsibility for his role in January 6
Capitol riot.  Trump is likely to remain weakened politically into
early 2023 at least as the Saturn-Neptune alignment (Dec 2022) and then
the Saturn-Pluto alignment (Mar 2023) activate key points in his
horoscope.

These updates are usually posted midweek. Be notified of new posts by following me on Twitter