This article will look at the first question: what is the relationship between the yield curve and bank net interest margins? The second question will be dealt with in a follow up article. I am including a fair amount of tutorial material, since this is projected to be a section in my banking primer book.

The simplest definition of net interest margin (NIM) that I have seen is: for an accounting period (quarter, year), take the interest income earned by the bank and subtract the interest paid. We then convert this dollar amount to a percentage by dividing by the average size of interest-earning assets. (Taken from the Moorad Choudhry Anthology, page 161.) If one is looking at a figure for real world banks, one might need to enquire into the exact accounting definition used by whomever calculated the figure.

If the bank’s interest-bearing assets were 100% financed by liabilities, this would be the weighted average interest rate on assets minus the weighted average interest rate on liabilities. However, some of the assets will be financed by capital (which incurs no interest expense), and so if the weighting of capital is increased, the net interest margin would increase. Given the relatively low percentage of capital on bank balance sheets, this effect will be somewhat limited.

Given the importance of this and similar metrics to banking industry analysts, the precise definition used is important for the management of the bank.

We can now ask: what happens to the Net Interest Margin when the risk-free yield curve changes?

I will immediately note that I am not attempting to write a detailed textbook on how to manage a bank, so I am making some simplifying assumptions.

Let us assume that we have a situation where these worries typically arise: the central bank is hiking rates, and short-term yields rise more than long-term yields.

In this case, we have the following situation on the asset side of the balance sheet.

On the liability side, the same situation holds.

The standard story is that “banks borrow short and lend long,” which people translate into: bank assets are fixed interest loans, and its liabilities are floating rate deposits. If that were true, the above scenario would translate into the NIM being squeezed: the interest paid on deposits rose, while asset interest did not.

This NIM Squeeze Happened in the 1970s

There is a reason why people like the above NIM squeeze story: it happened in the 1970s. Banks owned a lot of residential mortgages with fixed coupon rates, courtesy of the Baby Boom generation buying starter houses when they started having kids. Remember that the conventional mortgage in the United States has a 30-year amortisation period. Canadian banks at the time offered long-dated fixed interest mortgages (my parents had one) — they no longer go beyond 10 years for interest rate fixing (amortisation is longer), and 5 years is the practical limit.

The interest rates locked in before 1975 were comically low by the time of the Volcker shock. In the United States, this annihilated the post-war 3-5-3 model of the small Savings and Loan (S&L) banks. (“Pay 3% on deposits, charge 5% on loans, and hit the golf course by 3.”) Digging out of the hole created by the collapse of NIM led to excessive risk taking, which was part of the genesis of the S&L Crisis that hit by the early 1990s. (See Bill Black’s The Best Way to Rob a Bank is to Own One for a discussion, full citation below.)

That Was Then, This is Now

The problem with the squeeze story is that it relied on assumptions that did not hold — outside of Economics 101 bank balance sheets.

As a result of the banking system interest rate agony of the 1970s, and then the bond market collapse of 1994, regulators and banks have been very attentive to interest rate risk. Using digital computers, it is easy to calculate how sensitive interest rate assets and liabilities are versus key maturity points in the yield curve. (“Key rate duration/DV01” being the term of art, where “DV01” means the “dollar value of a one basis point change in yields.”)

If we had a bank that perfectly immunised its duration risk versus all points of the yield curve, the net changes in the discounted value of assets and liabilities would cancel out perfectly, regardless of what happens to the yield curve. (Note that since bank accounting will smooth out the changes in the values of assets and liabilities, the accounting treatment might register a profit/loss relative to the unchanged yield curve scenario. As such, bank treasury teams need to look both at economic value and accounting effects of interest rate changes.)

Of course, banks will not hedge out interest rate risk perfectly. Loans will have prepayment terms that are hard to model and hedge, and bank treasury teams are not totally risk averse. That said, it is not that hard to do a reasonable job of hedging out a lot of the interest rate risk a bank faces, particularly for parallel curve shift scenarios.

As an aside, it is not implausible for a bank to be able to use swaps to hedge out interest rate risk. This follows from the structure of the swap market. Although there is frenetic trading by proprietary traders, hedge funds, relative value quants, etc. , the “noise trading” sits on top of large directional positions taken by entities with big balance sheets. One of those large positions are asset managers (like pension funds) that use swaps to construct “synthetic bond portfolios” to hedge their actuarial interest rate risk. That is, they enter into swap positions that are the economic equivalent to levered long bond positions. (We saw this in the pension fund carnage in the United Kingdom in 2022.) Which entities are big enough to take the other side of those positions? Well, banks laying off the interest rate risk on their assets would be one major candidate — the synthetic short bond position would act to cancel out the duration of fixed coupon assets.

Another aside is that we need to distinguish between the “liquidity profile” and the “interest rate risk” of a floating-rate loan (bank asset). It does have a longer maturity than demand deposits that pay a floating rate, and thus the mismatch needs to be taken into account in liquidity management. However, the interest rate risk profile is the same — they both float up and down with short rates (modulo the spread between the short rates referenced).

How Should We Look At This?

My discussion here is a simplistic analysis of bank balance sheets, and it captures the spirit (but not the details) of how a bank treasury team approaches the issue. If we want to know what the effects of interest rate changes are on the banks’ balance sheets, we need to know how much interest rate risk bank treasury teams are taking. Given the highly sensitive nature of that information (squeezes happen), I would not expect to see much information in the public domain.

I was not a banking industry analyst, so I do not have strong opinions on the exact level of risk taken. That said, my instinct is that the interest rate risk taken is going to be a lot less than market folklore suggests. The general absence of banking implosions due to interest rate risk in the post-1994 era is suggestive. The other thing to keep in mind is the federal structure of most banks — profit and losses and allocated to different divisions. Somebody needs to eat the losses associated with duration mismatches (outside of cases where management effectively sets a target duration mismatch that acts as an internal benchmark). Generally speaking, the bond market is a hated market, and I doubt that bank employees can avoid the disdain the rest of the financial industry has for long duration positions. 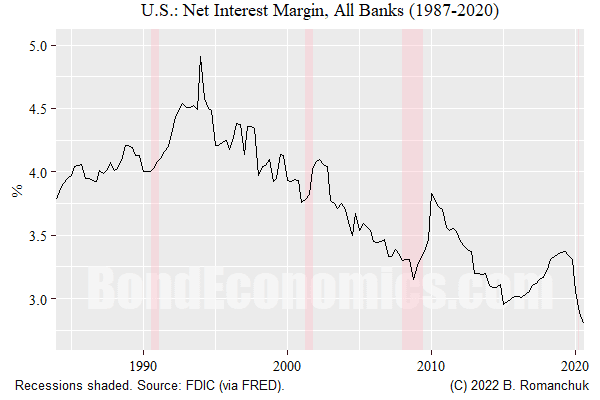 Huberto M. Ennis, Helen Fessenden, and John R. Walter did an analysis of the net interest margin in 2016: “Do Net Interest Margins and Interest Rates Move Together?” (URL: https://www.richmondfed.org/publications/research/economic_brief/2016/eb_16-05). They argue that the relationship between interest rate movements and the NIM is not particularly clear-cut — which is what one would expect from my arguments about interest rate hedging. The contents of that article parallel what I have written here, but the reader might want to see extra details and the citations of those authors.

The discussion in this article referred to the shocks to the yield curve. However, this is not the only area of interest — what happens when the yield curve is inverted for a period of time? In the follow up article, I will discuss how the yield curve slope affects net interest margins (or not).