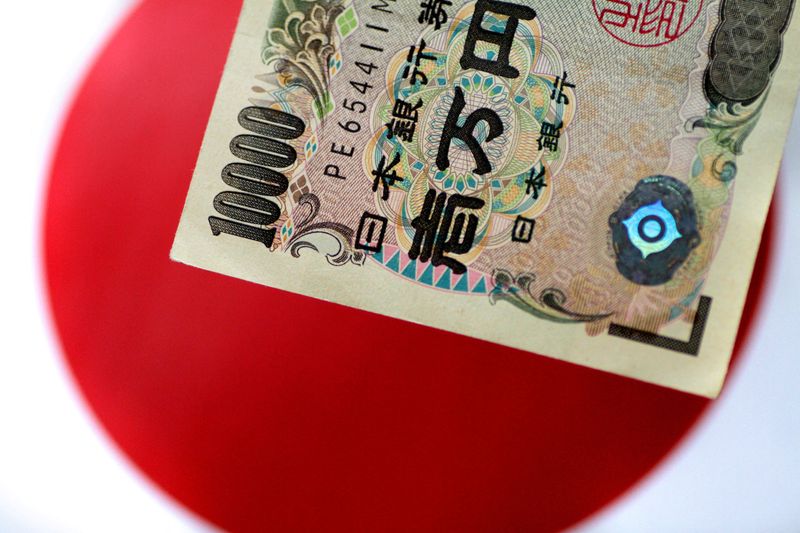 NEW YORK (Reuters) -The dollar rose on Tuesday on expectations the Federal Reserve could raise interest rates as early as March to counter rising inflation, while a global rally in stock markets knocked the safe-haven Japanese yen to a one-month low.

The greenback had been trading lower in the overnight session as riskier currencies rallied, but it strengthened after 9 a.m. Eastern time when data showed U.S. home prices rose 1.1% in October from September and were up 17.4% year-over-year.

Fed funds futures are pricing better than 50% odds for a first quarter-point rate hike by March, odds that were “unheard of just two weeks ago,” Trevisani said.

The Fed said in a policy statement on Dec. 15 it would end its pandemic-era bond purchases in March and pave the way for three quarter-percentage-point interest rate hikes by the end of 2022 as the economy nears full employment and inflation continues to surge.

The safe-haven yen touched a nearly one-month low against the dollar during the Asian session as global stock markets followed Wall Street higher.

The opened on Tuesday at a new record high, helped by retail sales data on Monday that eased worries that the highly infectious Omicron coronavirus variant would scupper the economic recovery.

“Markets globally are optimistic” that the fallout from Omicron will be contained, said Osamu Takashima, head of G10 FX strategy at Citigroup (NYSE:) Global Markets Japan.

The fact that U.S. equities rallied despite expectations for faster Fed tightening “implies that currently investor risk appetite must be very, very strong,” he said.

The Australian dollar, often considered a liquid proxy of risk appetite, rose to $0.7263, its highest level since Nov. 22, before pulling back to last trade at $0.7224.

Sterling, which often rises when risk sentiment improves, touched a one-month high of $1.3461, and fell to $1.3420 against the strengthening greenback.

Disclaimer: Fusion Media would like to remind you that the data contained in this website is not necessarily real-time nor accurate. All CFDs (stocks, indexes, futures) and Forex prices are not provided by exchanges but rather by market makers, and so prices may not be accurate and may differ from the actual market price, meaning prices are indicative and not appropriate for trading purposes. Therefore Fusion Media doesn`t bear any responsibility for any trading losses you might incur as a result of using this data.

Fusion Media or anyone involved with Fusion Media will not accept any liability for loss or damage as a result of reliance on the information including data, quotes, charts and buy/sell signals contained within this website. Please be fully informed regarding the risks and costs associated with trading the financial markets, it is one of the riskiest investment forms possible.